Forbe’s reports Adobe’s announcement that its Creative Suite of software applications would, in future, only be available via a cloud-based subscription plan has caused an outcry as artistic types the world over feel forced into making a perpetual commitment to Adobe. 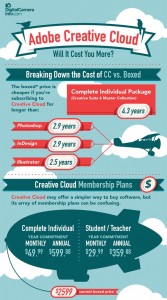 At the core of the protest ultimately is the fact that some people dislike the notion of a monthly bill in order to be able to use a piece of software. They see it as another monthly payment, along with their rent and car payment. These people would rather buy the software outright, and then run it for as long as possible. Many of these users are running old – some very old – versions of Creative Suite, and don’t feel the need to pay for an upgrade. Creative Cloud not only forces users to pay for every month they use the software, but also upgrades are forced on all Creative Cloud users a year after they are release.

To help you understand Adobe’s confusing pricing systems, Digital Camera Info has put together an infographic that compares the cost of the boxed set and the cost of subscribing to Creative Cloud.

Representing and promoting Somerset's design industry and its members at regional, national, and global level.